You are here:
Andhra PradeshIndia 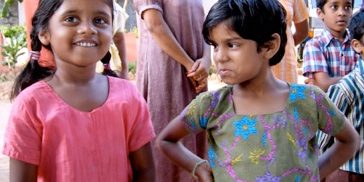 The Moinabad Orphanage is independent of the ACBM.

Brother Tim Gailbraith’s mother-in-law, sister Elvira Paul, had been brought up in an orphanage and, teaching in the village school at Moinabad, outside Hyderabad, she was very conscious of the number of children without parental care and support.

In 1981, she persuaded Tim to rent small premises in the village where with another helper, she looked after the basic needs of 12 homeless children. This was the beginning of a very practical and charitable project, and it is still growing! An acre of land was purchased with the help of the Christadelphian Meal-a-Day Fund in Britain, which also contributed to the erection of a substantial building.

Next, a Babies Home was built alongside, then two further buildings and later, a second story added to the original premises. A further two-story building was erected in 1995. Thus up to 50 children can now be cared for quite adequately. In 1992 came the first baptism of young people raised in the homes who, in their late teens, decided to commit their lives to Christ. At the time of writing there have been three others, as well as a marriage in the Lord. Sadly, sister Elvira died in 1996.”