India – The Seed Begins to Ripen 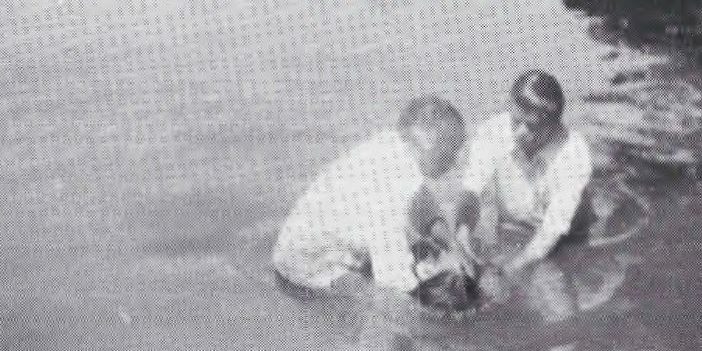 IT WAS 6 YEARS AGO last month (April 1979) that Br Tim Galbraith, newly married to Sis Sarah, moved to India to make it his adopted country, and live· in his wife’s home city of Hyderabad. They were the only Christadelphians in a country teeming with 700,000,000 people!

The beginnings were slow. Interest in the Bible appeared to be high. But it was one thing to preach the Truth, it was another thing to persuade them to join a nonexistent community. A complex publishing effort was set in motion. Increasing quantities of literature, booklets and pamphlets started to come off the press.

To facilitate this work, as well as to provide an income, Br Tim established a printing business, printing a lot of normal commercial work as well.

The writer visited Br Tim at the end of 1979, and together they went on a 4,000 km tour of 3 of the central Indian states and for 4 weeks Bible studies and Talks were given almost every day. There were glimmers of growing interest.

In 1980 the first baptism took place and Br Joseph Judah, baptised the previous year in U.K. moved back to his homeland, (although Sr Elvira Paul, Br Tim’s motherin- law had been baptised in 1979). In 1981 growing interest in State of Karnataka in the City of Bangalore and the nearby town of Mandya led to 4 baptisms in that area – with the promise of more. However, Bangalore was a 17 hour train journey from Hyderabad! There was a limit to what Br Tim could do. Br & Sr Allanson from New Zealand responded to an appeal and arrived at the end of that year. Their 27 month stay, before the ill health of Sr Allanson caused them to return home, saw the building up of the Bangalore Ecclesia in that area.

[members]The work was slow. There were joys, but there were disappointments. An experimental advertisement in a Kerala newspaper (the southernmost state of India) brought, directly or indirectly, the astonishing total of 1300 replies! Perhaps this wasn’t quite so surprising, seeing that of the 24 million or so people in that area, over 5 million reckon themselves to be Christians easily India’s highest percentage of Christians.

The promise of Kerala was exciting, but it was remote and a circuitous journey by land from Bangalore. Several visits were made. Several English Brethren became involved in this area of the work. There were more disappointments. So many had the wrong motive – material gain. Others were like those Paul encountered at Athens, who “spent their time in nothing else but either to tell, or to hear some new thing” . Still others were in the “ever learning” class, some boasting of the number of ‘Certificates’ they had gained in doing, literally, dozens’ of Courses. Nevertheless, some apparent gems gleamed, where real truth appeared to be the objective. Progress was slow – again there was
no ” church” for them to join. Standing apart from family and friends was a daunting challenge. 1983 saw the first baptism there – and in 1984 there was another.

At the beginning of 1985 , Br Tim could count 26 resident members of the brotherhood in India. The months of February and March saw that numbe r increase to 35. It has been a rewarding two months for those who have toiled hard and long. Br Arthur Fletcher wrote to us from Bangalore saying, “On Saturday and Sunday last, February 9 and 10, we had the pleasure in joining in the interviewing and baptism of six candidates for baptism, trained in the Truth by members of the Mandya meeting with occasional assistance from the Mission personnel. The new members of our faith are – Br Benjamin Thomas, Sr Rani Shakunthala (she is the wife of Br Jayavantha) Sr Eve Lalitha , known as Dolly, ( she is the wife of anothe r Br Thomas who was baptised in 1981) Sr Chako Violet, Sr Morris Kumari and Sr Meena Kumari.

Seven brethren and sisters went from Bangalore on the Saturday and the interviews took place throughout the day until 10.30 p.m., some 12 hours! All those interviewed gave a good confession, some having attended the Bible School at Hyderabad annually since 1983, and studied the Bible copiously since. Much of the interviews had to be
done by translation, but the Statement of Faith in its 3 parts was faithfully followed.

By 10 a.m. on Sunday morning, a full minibus took the whole party, including some interested strangers, to Sriringapatna on the River Cauvery, where the baptisms were to take place. They were followed by a breaking of bread, held on some broad concrete steps which led down to the water. This was a delightful setting”.

These baptisms have more than doubled the Mandya Ecclesia, which now numbers 10. There are 5 brethren and 5 sisters. Br Jayavantha has written to us telling of their hopes of hiring a house as a Christadelphian Centre. There is one that should be available from June, if the Lord will. It will be used for all meetings and studies, Sunday School, and other activities.

Later Br Arthur sent us another joyful letter telling how the Bangalore Ecclesia “rejoiced on Sunday last, March 3, in the baptism of our new Br J. Sounderaj Immanuel who came into the truth after the combined efforts of a number of brethren. He first attended a lecture by Br Ivan Sturman (of U.K.) on September 3, 1983, in the local St. Andrew’s Church Parish hall.

From then on he continued to take an interest. A great deal of this contact work has been borne by Br Stephen Lund (Adelaide), Br Robert Brinsden (N.Z.), and Br Athol Paton (Adelaide and N.Z.). The interview was conducted by Brn Chandu Das and Henry Harry of the Bangalore Meeting, and after a satisfactory confession of faith on Saturday evening, lmmanyel as he is known, was baptised before the breaking of bread on the Sunday morning”.

Also in March, two more baptisms took place in Kerala. One was a Dr. Varghese Kurian, and the other a dedicated Bible student, Matthew P. Jacobs. Both are contacts derived from the original advert in Kerala and have had extensive correspondence contact with brothers and sisters in U.K. Br Reg. and Sr Veronica Ansell (of U. K.), who have spent 9 of the last 18 months in India, took them through the interview and baptism – together with the local brother in Cochin, Br Zacharia. Concerning our new Br Jacobs, Br & Sr Ansell have written, that “he is trained as a hostel supervisor. He had a good position in Tiruvala working for the Church of South India. Because of his new Scriptural outlook and non-attendance at Church Services, et cetera, he was turned out of this home to a very poor and backward place at Kayamkalum. Soon he will almost undoubtedly lose his position completely, as pressure is being put upon him. Added to this are family difficulties as his father is a C.S.I. Pastor, and Mathew refused to have his child christened”.

These things illustrate the reasons why the Truth has been, humanly speaking, so slow to ripen in India – despite the widespread response in certain areas to our advertising. Even those who have responded have found the challenges very great. Sadly some have found the standards of the Truth hard to live up to – in a country in which corruption and immorality are the norm. Our workers have been saddened that it has been necessary to sever fellowship with two members for conduct unworthy of those who bear the name of Christ, while a third has disappeared to parts unknown. The labour has fallen heavily on some shoulders, and responsibilities
have produced a maturity beyond their years. There are several we might mention, but one will suffice as an example, and that is Br Athol Paton. Athol has spent 15 months in India in two stints, including making himself available to go at very short notice when the Allanson family was forced to leave.

The challenge of the work in India will continue until the Lord returns. It is proving to be a great training ground in broadening the comprehension of the Truth.

Those who have become involved in the work see the Gospel in a totally new setting – and yet in many ways it is a setting more in keeping with the atmosphere of the Bible itself, particularly when you get out into the rural simplicity of the Indian villages with a way of life that has not substantially changed since the time of Christ. The Gospel is preached to a people largely ignorant of the ‘wisdom’ of modern Christendom and the evil of evolution. A thorough knowledge of the Bible in the fundamental sense is most needful. It means that it is a valuable experience for our younger brothers and sisters growing in the Truth. We include sisters in this because they have performed an invaluable service in helping Br Tim in Hyderabad with all the literature production, magazine editing and production and secretarial duties, plus Sunday School and Youth activities. Who can take up the challenge in the time that yet remains? Who can put their hand to the plough so that more seed might ripen, under the Father’s good hand, that more might gain an entrance to His Kingdom?[/members]