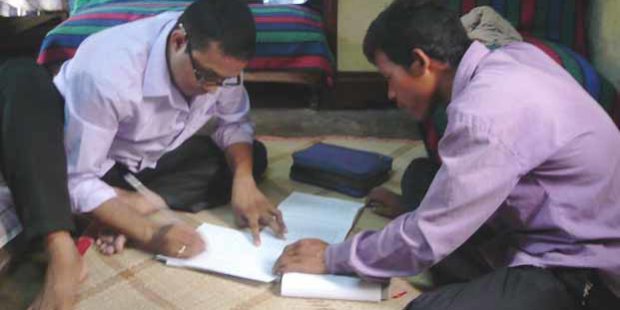 Flying into the city of Agartala in Northern India with Brother Milton Richardson, who has made this trip many times before, we were met by Brother Subrata Ganguly. Brother Subrata travels throughout the northern states of India to assist with the running of Bible schools and to translate in both Bangla and Hindi. In recent years he has brought Brother Surajit Debbarma into the Truth, and last year, at the West Bengal Bible School, his wife Swanlata was also baptised. This has been a wonderful thing for Subrata and Dipa, as they now have some local support and fellowship with our new brother and sister.

New contacts from the Believer’s Church

The following day we travelled together with Subrata and Surajit to a tribal village about an hour and a half away, to speak to some who are interested in the Truth. We were greeted by a man who had formerly been a pastor in the Believer’s Church, which has a large following throughout India. There has been an upheaval within the church recently and through contact with Brother Subrata there were some, including this man and his family, who were interested to gain a more comprehensive understanding of the Bible. It has only been recently that the Old Testament has been available to them in their own dialect, so we witnessed with great interest the faces and expressions of this quiet but attentive group, who followed each of the quotations as they were dealt with in order. Subrata spoke in Bangla, his native tongue, and Surajit translated into Kokborok, the local language. This was an unusual circumstance as it is more normal to hear foreign Englishspeaking visitors speak and the message translated into the local language. Subrata and Surajit make a great team and we could sense and see their wonderful enthusiasm. Surajit, although very young in the Truth, was clearly thrilled to be able to speak in his own language about the things he now believes. Subrata and Surajit have occupations which demand a lot of time but they are determined to preach whenever an opportunity arises. Wherever we went with Subrata he was greeted by those with whom he had previously spoken about his beliefs.

Little by little there are more and more enquiries about what we believe. There is much work to be done here, and we left with invitations to return.

The next day we held a Memorial Meeting. One of the most memorable images in my mind was watching Subrata showing Surajit a formal order for a Memorial Meeting. They knelt together on the floor, an older and more experienced brother sharing with the younger one of the most important aspects of our faith. Surajit did a wonderful job, with a little help from us at times. He has learned to take re- sponsibility for a very special part of life as a disciple serving our Lord Jesus Christ. As always it is special to share the fellowship in that simple ceremony that transcends all our differences and unites us.

We left Agartala encouraged and thankful for the opportunity to work alongside our brothers and sisters who, while small in number, are diligently maintaining their faith and have all the signs of growth, indeed, “as many as the Lord our God shall call”.