On top of the world

You are here:
Bible Missionary MagazineNepal 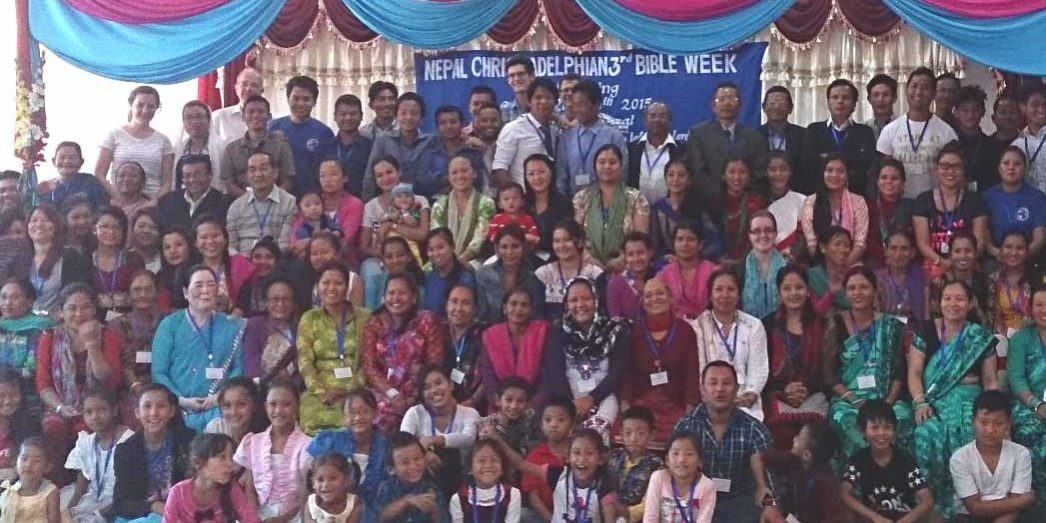 In mid-October, a party of eight South Australians arrived in Nepal for the third Nepal Bible Week from 21 to 25 October.

The city of Kathmandu is a sprawling kaleidoscope of colour, activity and noise, with people everywhere as they go about their daily business: rickshaws, taxis, motor-bikes and bicycle vendors all jostling for space on the narrow roads. There are rows of tiny shops competing for your rupees where you can buy trekking gear, scarves, clothes, Ghurkha knives of all sizes, food, and idols, idols and more idols.

95% of the 31 million population are Hindu. We arrived at the time of the Hindu Dashain Festival, a national religious festival. The festival provides a golden opportunity, in a country where employment means working a six-day week with only Saturday free, for most brothers and sisters to meet for a Bible school. Consequently, 100 local brothers and sisters (and 35 children from kindergarten age to teenagers) gathered, free to enjoy fellowship around the Word of God.

Around the Word of God

The fellowship began at 8 a.m. over a typical breakfast of rice and curried chickpeas. Our brothers and sisters were extremely friendly and welcoming, and would give to others, even if it meant going without themselves. They may be relatively poor in this world’s goods but they are rich in faith and service to others. Daily life is not easy in Kathmandu or in the country, yet there is a toughness, a resilience that keeps people going on. Being separate in a Hindu world is a real challenge and the personal cost for some has been high. It made the fellowship of that week even more special.

Studies commenced at 9 a.m. with several hymns sung enthusiastically in Nepali followed by a daily reading and comments by Brother Ken on Ezekiel’s Temple. This was followed by a study of ‘God’s family’ by Brother Adrian. These studies covered the miracle of God’s individual calling process, Bible families included in Scripture “for our learning” and our appreciation that God has placed us in his family to develop a godly seed and build a spiritual house that our God can dwell in.

After the break at 11.30 a.m., more hymns were sung in Nepali followed by a few more in English. It is fair to say that with the hymn singing we had as much difficulty with Nepalese as they did with English. We can only look forward to the kingdom when there will be the one common language and current language barriers are removed.

Brother Micah then presented the second study on the Book of Haggai with an emphasis on considering our ways and worship. Following lunch, the final study for each day was conducted with more enthusiastic hymn singing and local brothers leading studies on a variety of topics. The presenters for these studies were Brothers Bimal, Shiva, Prakash and Bunty.

We were thankful for our translating brothers, Prakash, Satyadeep and Roman, who supported the Bible School with the difficult and mentally tiring work of connecting English with Nepalese in a meaningful way which maintains the sense of the key concepts.

While the adults were in the studies, Julie, Abi and helpers occupied the children with lessons and activities. The older children completed a model of Ezekiel’s Temple. They also learned and presented several items for the brothers and sisters. One afternoon Bible sketches using makeshift props were performed and enjoyed immensely by all.

The Bible Week was a time of joyful fellowship, increased appreciation of the blessings in Christ and a time of reflection on and appreciation of each other as valued members of God’s worldwide family. Physically and spiritually we were on top of the world! Truly God has “raised us up with him and seated us with him in the heavenly places in Christ Jesus” (Ephesians 2:6).

It didn’t end there

During the week following the Bible Week, the two ecclesias combined their activities and held meetings in members’ homes. Brother Sam presented two studies on Philemon and drew out the lessons of forgiveness and reconciliation, brotherly love in Christ and mutual labour in the service of our Lord. Sisters’ classes were also held at both ecclesias: valuable discussions around the Scriptures followed and that special fellowship enjoyed by sisters was encouraging.
Public preaching is not permitted in Nepal, so the Word of God has been spread through word of mouth from devout and sincere brothers and sisters. The personal preaching aided by our God’s blessing has resulted in our ecclesial families in Nepal. Surely an example for us! Currently several interested friends are attending and making good progress in their understanding of the Scriptures.

Life was made more difficult for our brothers and sisters by the massive 25 April earthquake. Unemployment is high at around 46%, making it difficult to find sustainable work, and if it is found the wages are pitifully low relative to the cost of living. At the time of our visit fuel and gas supplies were running out because of restrictions on the movement of fuel trucks across the Indian border to Nepal. This has been going on for several weeks, making cooking at home or in restaurants very difficult. Despite all this they went about their daily routine.

Could we recommend a visit to Nepal? Absolutely. Is there further work that can be done in support of our brothers and sisters there? There certainly is. Interested? Please contact Brother Jonathan Wallace (Victoria), Jeff Pit or Ken Pitcher (South Australia), who will be pleased to discuss the exciting work in Nepal.

As we await the return of our Lord to remedy all of the wrongs and injustices that are in the world at present and usher in a wonderful world of peace, tranquillity and righteousness, may our God bless and keep his face shining upon our beloved brothers and sisters in Nepal.

ADRIAN AND DOREEN FARREN
on behalf of Ken and Julie Pitcher, Sam and Abi Mansfield, Micah Steele and Joanna Pitcher